In January 2021, SOMO, the Iraqi State Oil Marketing Organisation, launched a new grade, Basrah Medium, to remedy issues around high variations in the quality of Basrah Light. With its API set at 27.9 degrees and a 3% sulphur content, Basrah Medium was predicted by Petro-Logistics to become the largest grade exported from southern Iraq1.

After nine months on the market, Basrah Medium has indeed become the top Iraqi grade in terms of volume. The reshuffling amongst the grades has enabled Basrah Light to become a lighter but smaller grade whilst Basrah Heavy volumes have increased noticeably. Destinations of Basrah grades have evolved since the introduction of Basrah Medium, as China consolidates its top buyer position.

When SOMO announced the introduction Basrah Medium late in 2020, Iraq was in the thick of the latest OPEC+ curtailment agreement. Between May and December 2020, Basrah exports (at the time, comprised only of Basrah Light and Basrah Heavy) averaged 2.7 mb/d, down by over 700 kb/d compared to 2019. With cuts progressively easing, the three Basrah grades reached an average of 2.9 mb/d for the first nine months of 2021.

On a volumetric basis, Basrah Medium has become the largest grade, averaging 1 mb/d for the first nine months of the year. Basrah Heavy came second on average, with loadings slightly below 1 mb/d since the start of the year. Basrah Light went from being the largest to becoming the smallest of the three grades. Basrah Light exports have averaged just above 900 kb/d for the first nine months of 2021, down by more than 1 mb/d compared to the May-December 2020 period. 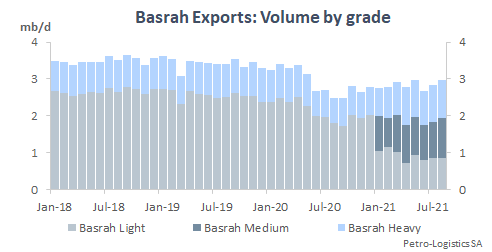 A Lighter Basrah Light Since the Introduction of Basrah Medium

SOMO’s intent was to modify the quality of the two existing Basrah grades and introduce a third one. Compared to the characteristics announced by SOMO, southern Iraqi cargoes loaded so far in 2021 have generally aligned with the official specifications.

According to Petro-Logistics’ data, cargoes of Basrah Medium loaded between January and August 2021 had an average API of almost 28 degrees, very close to the official 27.9 degrees. Basrah Heavy saw minor changes to its quality with the average for the first eight months of 2021 standing at 23.50 degrees. 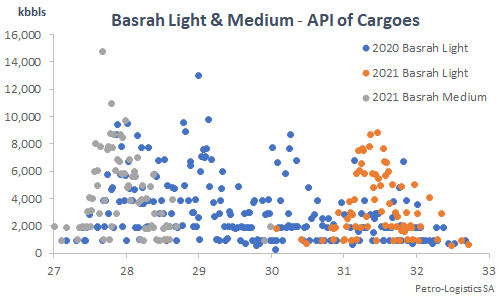 The most significant impact from the introduction of Basrah Medium has been on the quality of Basrah Light. From an average API of around 29 degrees in 2019 and in 2020, Basrah Light cargoes have averaged 31.50 degrees for the first eight months of 2021.

The introduction of Basrah Medium was aimed at stabilising the quality of Basrah Light. Between January and August 2021, the standard deviation on the API of Basrah Light cargoes significantly shrunk, meaning the grade’s exported barrels have a narrower API range. 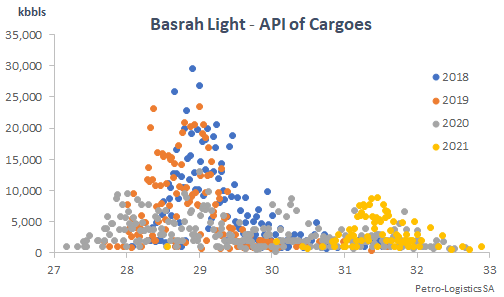 The introduction of Basrah Medium in January 2021 had an impact on the destinations of Basrah barrels, although other factors than the change in API were also at play here. Overall, Basrah barrels have seen a small decrease in exports to Asia, whilst Europe and North America (including Ain Sukhna) saw their share rise.

China actually decreased its overall purchases of Basrah grades, from over 1 mb/d in 2020 to about 900 kb/d so far in 2021. In 2020, Chinese refiners had stockpiled crudes due to the low-price environment, with such reserve buying seemingly ceasing in 2021.

With the decrease in Chinese imports, India in 2021 regained its title of top Basrah buyer, which it had lost in 2020. The volume of Basrah crude to India held almost stable year-on-year. However, in percentage terms India’s share of Basrah exports has risen to 33.6% so far in 2021. By contrast, China’s share decreased for the first nine months of 2021.

With Basrah Light seeing volume and quality changes in 2021, the destinations of export cargoes also evolved. Chinese refiners have stepped away from the grade, taking only 300 kb/d so far in 2021, down by about 600 kb/d compared to 2020. Indian refiners took less on a volumetric basis, but increased their share from 25% in 2020 to 33% for January-September 2021. Western buyers (Europe, US, Latin America) also increased their share. 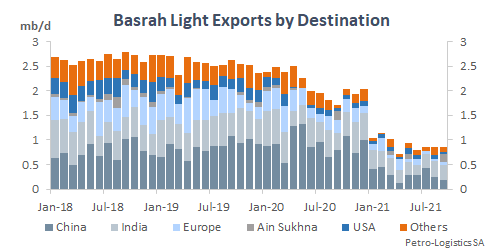 As the specifications changed, what were previously Basrah Light barrels were mostly blended into Basrah Medium, and small changes were made to Basrah Heavy. The heavier Basrah grade has also seen some limited changes to its buyers’ pool. Whilst Chinese refiners are slightly decreasing their purchase of the grade, Indian refiners are now buying 50% of total Basrah Heavy loadings (+2% versus 2020).

Basrah Medium has benefited from the other Basrah grades’ established clientele and quickly gained favour with Chinese refiners. On average 50% of the grade’s exported volume landed in China. The second largest market has been India, with Europe being the third. 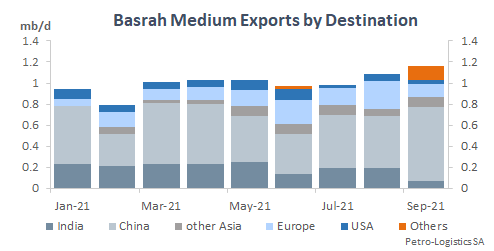 In the future, SOMO will continue to favour Basrah Medium, having announced that in 2022 Basrah Light will be allocated to domestic refineries and term buyers won’t be able to ask for term volumes. In a further sign of the shift, a few weeks ago SOMO reconfigured its southern terminal to increase the loading capacity for Basrah Medium at the expense of Basrah Light.

SOMO is also getting more aggressive in its overall marketing strategy, relying at times on spot trading and announcing that it could step away from the OSP system and move towards benchmark pricing, thus better taking into account real time market changes.

As OPEC+ cuts ease, Iraq will be in a position to ship more crude from its southern terminals and has placed Basrah Medium at the centre of its marketing strategy. Basrah Heavy will play a supporting role as Basrah Light fades into the background.

The Indian Oil Bridge Between Russia and its Sanctioners