Crude and condensate imports into China for countries covered by Petro-Logistics1 saw a slower rate of increase in 2021 that during 2020, up by only 1% versus +4% from a lower base the previous year. Total crude imports (including FSU pipeline and Iranian indirect barrels) averaged 8.268 mb/d in 2021. 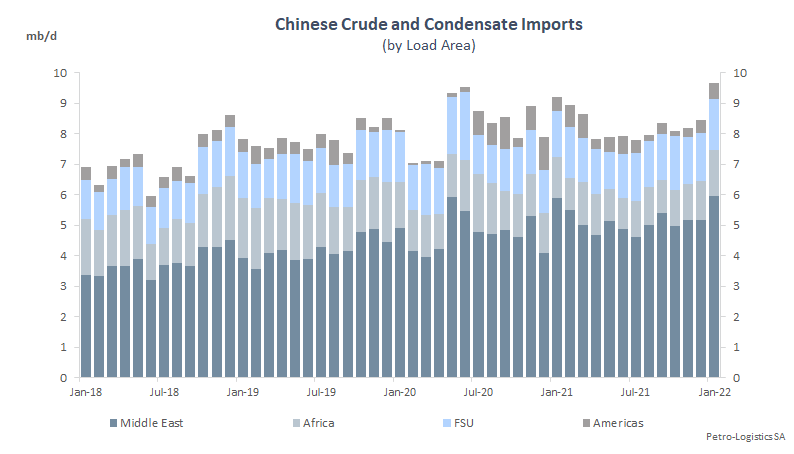 Representing the largest source of supply, the share of Middle Eastern barrels was up year-on-year to 62% (+4%), whilst the volumes of oil imported from Africa continued to decline, at 15% of total imports (-3% y/y). Imports from both the FSU and the Americas were fairly stable in 2021 compared to 2020, at 18% (-1% y/y) and 5% (stable) respectively. However, in the Americas, barrels changed origins, with a drop in USGC barrels offset by an increase in direct Venezuelan arrivals. 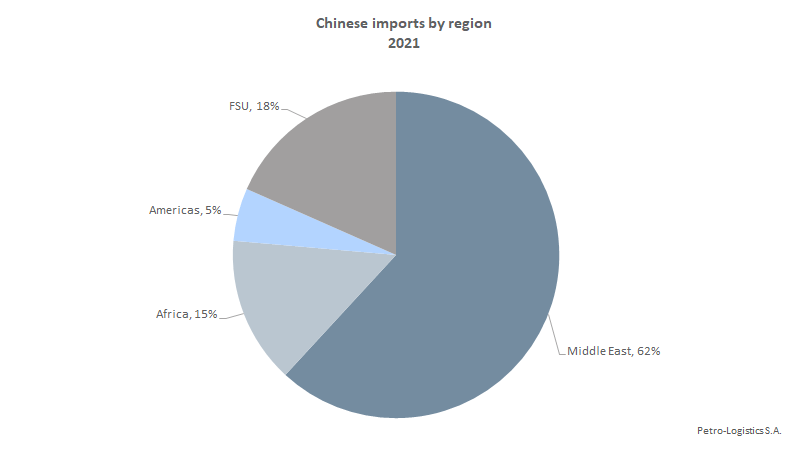 At 1.6 mb/d, Saudi Arabia remained the top supplier of crude to Chinese refiners in 2021 as it was in previous years. Russia was the second largest supplier, with very stable volumes of 1.3 mb/d (pipeline and seaborne combined). The third largest supplier was Iraq, with a decrease of 160 kb/d y/y in 2021, to slightly below 1 mb/d. A distant fourth was Angola, at 725 kb/d.

The other notable feature in the Middle East in 2021 was the surge in Iranian volumes. Iranian barrels landing in China increased to about 600 kb/d in 2021, up around 300 kb/d y/y. Direct shipments from Iran to China remained at low levels (see below graph) but indirect arrivals coming from transhipment points in South East Asia rose markedly. 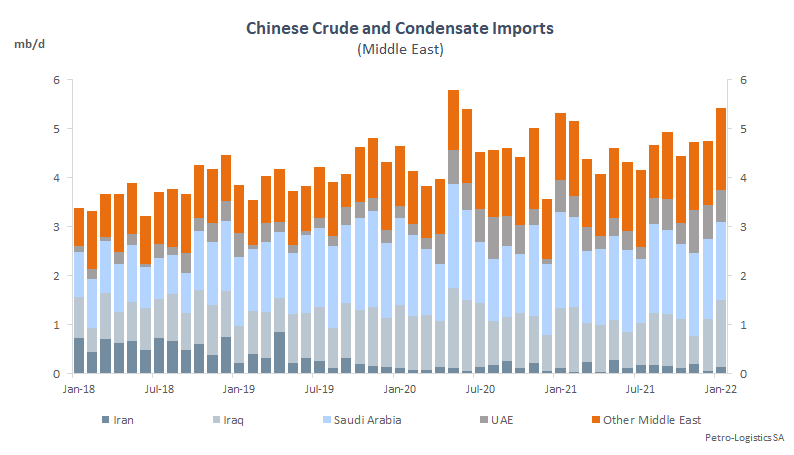 Africa was the producing region that suffered from the largest fall in imports into China, with a 17% y/y drop, to 1.2 mb/d. China has been taking fewer barrels in the last couple of years from a high of about 1.8 mb/d in 2019.

In volumetric terms, the most significant reductions amongst African countries were Angola and Gabon. Libyan production recovered in 2021, sending more crude to China, at almost 100 kb/d but below the 2019 level of 189 kb/d. 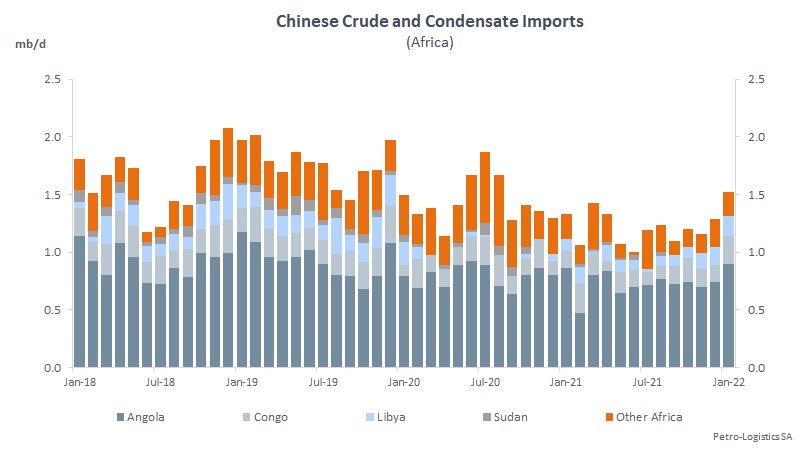 The total volume of crude oil and condensate coming from the Americas was fairly stable in 2021, at about 450 kb/d. However, the origins have varied, with an increase in Venezuelan barrels directly ending in China to around 150 kb/d offsetting a drop in USGC arrivals, to slightly over 200 kb/d. 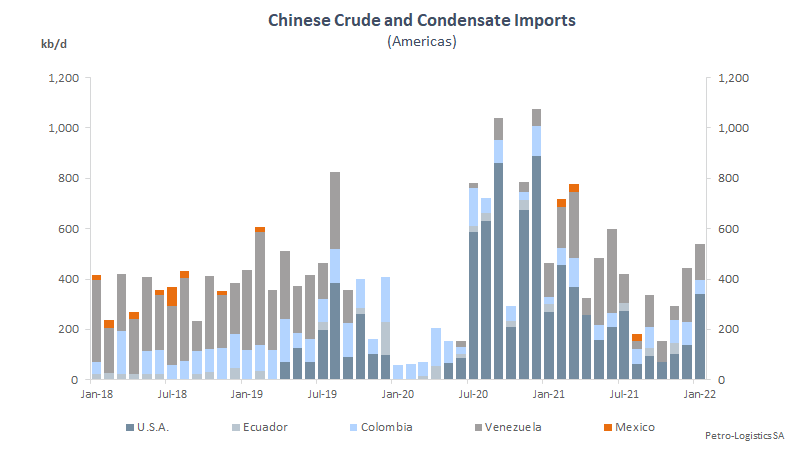 Congestion at Chinese ports was a significant issue in 2020 but the delays have largely cleared since, with the exception of the port of Zhoushan continuing to see a backlog.

Throughout 2020, China built its crude stocks, having bought barrels opportunistically during the low-price environment. In September 2021, the Chinese government organised an auction of some 7.4 mbbls from its strategic reserves, with new releases expected in February 2022. Data for January 2022 show a strong start to the year for crude imports, rising above 9 mb/d.

2022 is expected to see continued growth in global crude demand, with China at its centre. Iran should remain a core supplier to a number of Chinese refiners, with Saudi Arabia and Russia as the top two suppliers. Iraq is likely to hold its position as third biggest supplier, despite potential quality issues with Basrah Medium following the abrupt halt of Basrah Light exports (see our recent blog post). African and US producers have borne the brunt of the changes to China’s import patterns. With OPEC+ attempting to return to 2019 production levels, the additional volumes will need to find homes. Producers will continue to fight for market share in China, the world’s biggest importer of crude.

Basrah Medium: The New Leader of the Iraqi Crude Pack