When Saudi Arabia decides to increase or decrease production as part of its OPEC strategy, the market is generally aware that Arab Light as the highest volume grade and Arab Heavy as the lowest value grade are key swing barrels. What goes less noticed though is that in the midst of the wild production swings, loadings of one key grade barely budge: Arab Medium. 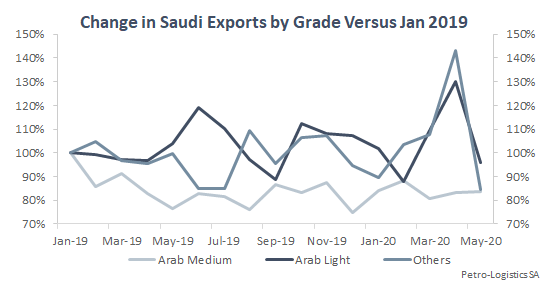 Why is Arab Medium so steady? One clue is in the more concentrated customer base. Arab Light’s top three customers take just 22% of its volumes. Arab Heavy’s take 31%. Arab Extra Light’s 36%. But Arab Medium’s take 46%. So few customers likely means tighter relationships designed to supply consistent baseload supply which no one wants to see disrupted.

Another clue in the data comes from what happens when Arab Medium’s Asian baseload customers (who account for 87% of loadings) aren’t taking barrels. Such as for refinery maintenance or now the Covid demand crisis. As the Covid demand collapse began, loadings of the grade to Asia in the March to May period fell -25% versus January and February.

And yet total global Arab Medium loadings stayed flat all the way through the production surge in April and drastic cuts in May. Even as every other grade was cut in May and demand sat in the doldrums, Vela took the Arab Medium barrels Asian customers wouldn’t and moved them to the US. While everything else was being slashed amidst the most chaotic oil market in generations, a deliberate decision was made by the Saudis to use their own system assets to keep Arab Medium loadings (and presumably production) steady. That is a sign of strong commitment to the grade. 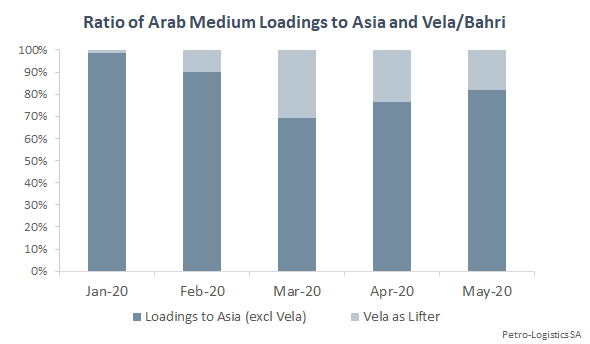