Since the shift from market share to price management was announced in Algiers on September 28, the energy industry has once again been focused keenly on the messages and actions from OPEC and its key members. Rivalries and differences of the past have been put aside, including with key non-OPEC producer Russia. OPEC has also developed a new approach to communication in its attempts to coerce higher prices from the market. In the end, words can only do so much. Clearing the overhang in oil stocks and sustaining higher prices will require real, meaningful and cohesive action from the oil cartel.

On November 30, OPEC ratified their agreement to cut production, offering to trim nearly 1.2 mb/d from recent production levels, although exempting Nigeria and Libya and allowing Iran to continue expanding production. Additional cuts will come from Russia and a group of other non-OPEC producers. These are not the largest cuts in OPEC’s history, but the swing in strategy caught the market off guard and communication alignment since has been impressive. To maintain price momentum the market now needs material compliance and clear signs the cuts are eating into the global inventory glut.

As the below chart from the IEA’s January Oil Market Report demonstrates, the accumulation of excess supply since mid 2014 has been extremely significant at roughly 1 mb/d on average from Q2 2014 until Q4 2016, making the total excess inventory accumulated very close to 1 billion barrels. The forecast shown in this chart for Q1 and Q2 2017 assumes full OPEC and non-OPEC cut compliance, which generates a draw of 0.7 mb/d over the first half, or 130 million barrels. 100% compliance to the agreed cuts is not realistic and certainly is not the trend thus far in January, as outlined in our latest OPEC Production Monitor. Petro-Logistics expects OPEC to ramp up to 70% compliance during the first quarter, with continued uncertainty one way or the other with respect to Libya and Nigeria, both of whom have increased production thus far in January. Non-OPEC compliance largely centres on Russia and Oman as other participants are not expected to comply or only contribute natural declines. Petro-Logistics expects Oman to deliver on its commitment in full, in line with Saudi Arabia, UAE and Kuwait. Russia’s contribution is likely to largely be through field maintenance in the middle of the first half, although we will be monitoring the situation closely. 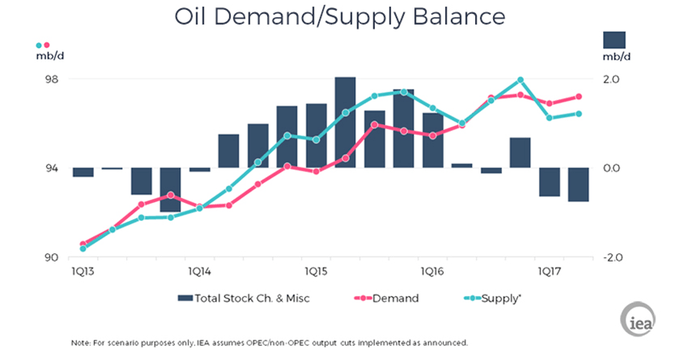 Much attention has been given to indications of production cuts during December, however the curtailment agreement only commenced in January. For the last month and half, OPEC has been busy discussing how to ensure compliance rather than relying on traditional secondary sources, many of which are simply surveys of market participants. OPEC has traditionally measured quotas on production rather than exports while from the perspective of a global oil market, supply to market may be the metric that matters. Petro-Logistics expects OPEC to stick with production as their primary metric, but to bring much needed additional scrutiny to exports.

In simple terms: Production is what comes out of the ground, Supply is production +/- inventory changes, and Exports are what leaves the country. The differences between these numbers and changes in them can be material, compounding compliance monitoring.

Production is the most opaque measure of activity as it is an aggregation of literally thousands of wells with limited transparency unless numerous on the ground resources are engaged. Traditionally this has allowed OPEC members to represent their production with limited ability to prove or disprove their statements, except by niche data providers, such as Petro-Logistics.

Supply to market and exports can be sustained or increased, even if production is declining. Iran built large inventories of crude and condensate in floating storage during the sanction period that it has subsequently been releasing to market. Saudi Arabia has also built material inventories over the last two years and can supply more than it produces for an extended period.

Exports are not easy to monitor either. Several OPEC member countries and Russia export large and growing quantities of refined products. There are cross border swaps of crude between Iran, Turkmenistan and Kazakhstan. Bahrain production is outside OPEC but exports via Saudi ports. Iraqi Kurd production moves via pipeline and road to Turkey and Iran. Russia exports not just via myriad ports but also via rail, pipeline, barge and even truck, all of which have been employed in bypassing central government attempts at controls of exports in the past. Venezuela is the most complex exporter to monitor with heavy oil upgrading and blending operations, export to intermediate blending locations and a degree of re-importing as well as material asphalt and heavy refined product flows.

OPEC has been exploring loading schedules as a forward indicator of member and non-member country intentions. This is a good idea, although forecast and actual loading schedules are not always adhered to so can be unreliable as a forward indicator, as the below chart demonstrates in 2016 for Iran. Iraq’s lack of onshore storage infrastructure has led to overscheduling to avoid being stuck without vessels to load, which would require upstream production to be halted when tanks become full. The demurrage associated with loading Iraqi grades has reached epic proportions at times. Other countries have different challenges but similar implications for loading schedules as a metric. Member countries would be tempted to understate their loading programs. 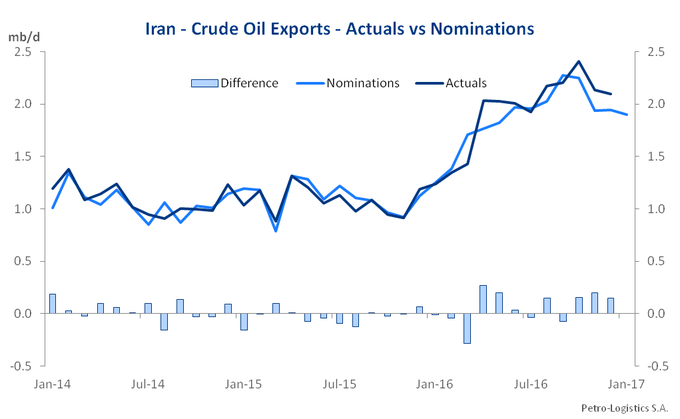 If this situation were not complicated enough, key reference data such as JODI, IEA, EIA is imperfect and delayed with some key countries not publishing data and others known to be inaccurate. In December, IEA corrected six years of Russian exports and demand, fundamentally shifting their global supply demand balance and increasing the implied inventory glut. Additional adjustments were made in the IEA’s January OMR.

In this complex world, there is little substitute for clean data, human experience and the hard work to unravel what is going on. To this end, Petro-Logistics is creating two new reports specifically focused on OPEC and non-OPEC compliance monitoring as measured through live export analysis. These reports, the OPEC Compliance Monitor and Non-OPEC Compliance Monitor, will begin publication during February with the option of automated weekly API Data Feeds and monthly reconciliation updates, building on the insights from Petro-Logistics’ on the ground sources within these countries and accounting for the subtleties of each of these markets.

Also available are supplemental cargo by cargo data containing additional granularity on vessels, grades and ownership upon loading. This information has previously only been available as part of the wider data packages in our detailed monthly Country Reports or via our Data Portal.

Will they or won't they

Druzhba: A friendship built to endure

Russia to the Rescue

OPEC vs Shale Round 3