The summer months saw a new baseline established for Indian crude imports from Russia, with volumes approaching 900 kb/d in the June-August period. This compares to a mere 11 kb/d in the three months prior to the war. While the numbers are volatile month to month, a short-term equilibrium has likely been reached, as the main factors affecting tradeflows have become clear to the market. Though this will soon change again as shall be discussed later in this blog post.

Middle Eastern barrels represented the biggest chunk of oil displaced by Russia likely because of their relatively similar quality. Indian refiners appear to have both reduced what limited spot purchases are procured from the Middle East and worked within permissible short-term contract allowances to reduce term purchases.

Temporary term reductions were made easier by the fact that Indian refiners initially brought in extra Middle East volumes amidst the uncertainty surrounding the start of the war. When the declines came, they were widespread with substantial drops from all the countries in the region, apart from a small increase from Kuwait. 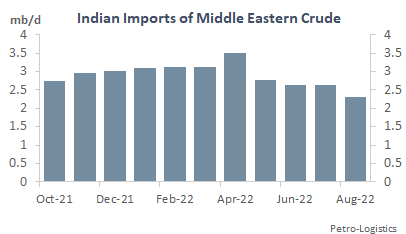 In current market conditions, India can likely take no more than an additional 300 kb/d from Russia versus the summer averages, for a total of 1.2 million b/d. Even this number would be contractually and logistically difficult (from a refinery crude slate perspective) to displace. It would require Russia to price aggressively enough to drive similar quality competitors to historical low volumes not seen since the worst days of Covid run cuts. A more realistic number would probably be anywhere from no change to +150 kb/d on average.

The difficulties in importing beyond these relatively modest further increments are that 1) there are very few remaining spot barrels imported of similar quality to Urals that would be easily replaceable for the refineries, 2) Indian refiners do not want to damage long-term supply relationships with large Middle Eastern producers, and 3) there is little room left to decrease term barrels within the allowances of supplier term contracts.

Based on Petro-Logistics’ research, about one third of Indian imports (roughly 1.5 mb/d) are spot rather than term purchases. Of this amount, Russia has already taken over about half the available volume of spot barrels. Of the remaining half, only 448 kb/d of imported grades this summer were within plus-or-minus 5 degrees API of Urals. 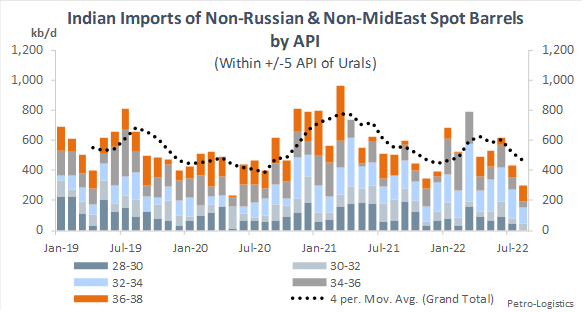 Could imports of Urals-like spot grades go lower on a sustained basis? If all Indian refiners went to their individual historical lows simultaneously, then the current 450 kb/d average could theoretically dip to 150 kb/d. That 300 kb/d reduction likely represents the maximum amount of additional market share Russian crude could gain in current market conditions.

However, current market conditions are about to change in several big ways. Factors that could increase Russian flows to India include: 1) the ramp-up of Kuwait’s 615 kb/d Al-Zour refinery, 2) the EU ban on Russian crude oil imports in December, 3) the still ill-defined G7 Russian oil price cap plan.

As Al-Zour ramps up, the gradual but concomitant loss of around 1/3 of Kuwaiti crude exports could impact Indian imports. Given that Kuwait Export grade is the only one close in quality to Urals, and based on historical Indian import levels, 150 kb/d of extra Russian imports seems to be the maximum impact Al-Zour’s startup could have.

The impact of the EU’s ban on Russian crude imports in December will theoretically send up to 1.5 million b/d looking for new customers. The volumetric impact of a price cap is impossible to judge at present given the lack of details and how geopolitics will influence its implementation in the market.

If we take an extreme scenario of Russia discounting to almost any level needed to move barrels and Indian refiners choosing to absolutely maximize Russian intake despite quality slate and Middle East supplier relationship issues, then theoretically a million b/d of new Russian imports from current levels might be possible. However, Petro-Logistics considers such a large number highly unlikely. A more realistic outer limit in the face of extreme Russian discounting could be 700 kb/d: 450 kb/d of spot medium barrel replacement (i.e., all the plus-or-minus 5 API grades but nothing further) and 250 kb/d of Middle East term barrels (including Kuwait) when renegotiations come up.

On the flip side, an Iran nuclear deal could decrease Indian imports from Russia. Iran’s incentives would likely include diversification of their exports both to get a toehold in multiple markets and strengthen political ties. A 2018 baseline (the last year before sanctions clamped down again) would in normal situations suggest half a million barrels each to India, China, Europe, and other Asia. These not being normal times, Europe would likely pull more Iranian barrels to replace Russian, somewhat reducing the amount India buys. Nonetheless, Russia would likely lose a few hundred kb/d of sales in India. 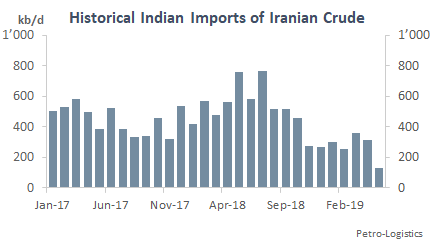 Petro-Logistics’ assumption is that near-term Indian imports of Russian crude will hover in the 800-900 kb/d range of the summer months. Precise volumes will depend on how aggressive Russian pricing is and Indian refinery run rates. But with only one week until the implementation of new sanctions that will limit European imports, Russia is going to find fresh incentives to push additional volumes into India. This could easily drive sustained Russian flows of over 1 million b/d into the country in 2023, with the potential to see volumes rise to as high as 1.5 mb/d in the face of extreme Russian discounts.

Please note: The unabridged version of this note was released to clients on 27 September 2022 and includes additional tables, charts and analysis. Please contact our Sales Team for full access: c2FsZXNAcGV0cm8tbG9naXN0aWNzLmNvbQ==